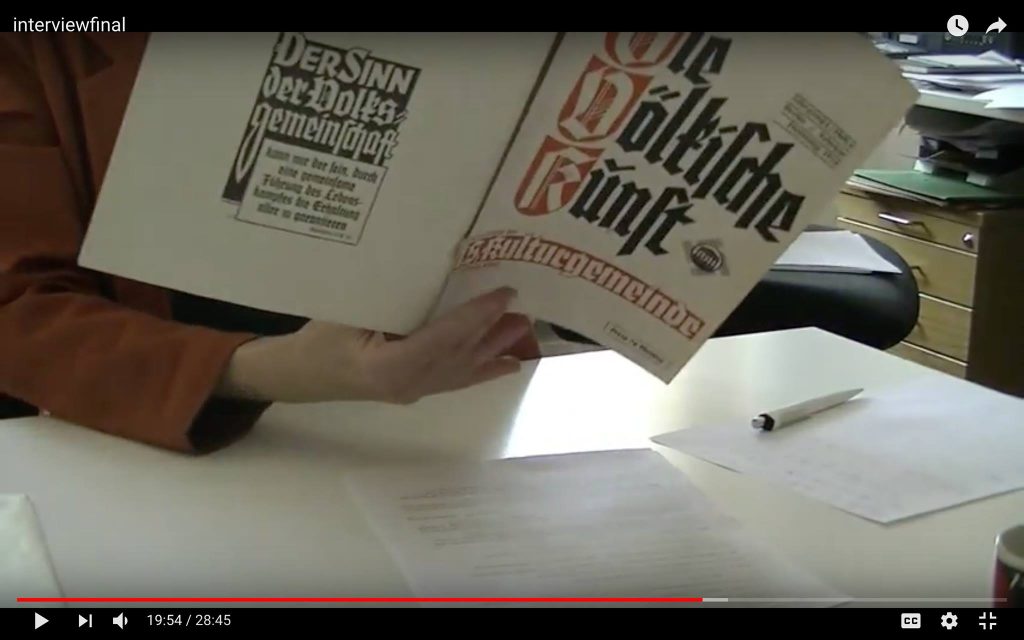 Joshua Schwebel was invited to participate in the group show ‘Interventionen’ at the Heimatmuseum Reinickendorf in Berlin. Schwebel proposed to work with the museum’s Nazi artefacts. A video was made of the museum director handling and discussing these objects. Schwebel then addressed a letter to the director, proposing an artistic-symbolic reparation:

I am writing to follow-up from our interview last week, and to add a further act to my work. This letter and your response will become part of the work I will display in the upcoming exhibition.

I have been thinking ceaselessly about the objects we discussed in our conversation. How these glittering swastikas and adorned certificates made me tremble. They sat before us in archival envelopes as we talked, and I spoke with you about them as though I, too, recognized their historical value.

In our conversation you described how these objects were ‘donated’ to the museum anonymously and without adequate historical information, and that this lack of correct and complete data is disappointing from a museological perspective. Either the donors felt ashamed to have these souvenirs of NS times in their family’s possession, or else they wished that these objects endure as historical artifacts of the region. In either case, the artifacts themselves ​do​ still endure, and because they are under the aegis of the museum, they survive and are protected. I certainly recognize the importance of documenting, discussing, and acknowledging the historical events from this time, however, I cannot understand why it is necessary to preserve its objects.

I cannot but feel angry that I see no equivalent artifacts of Jewish culture and its everyday history existing in your museum. It is quite evident that there ​were​ Jews living in Reinickendorf, at least until NS times. But Jewish objects did not find their way into museum collections because they were stripped from bodies, which were also melted, burned, or otherwise rendered into fuel for war, hatred, and Capital. Jews are represented by death markers here.

In response to this asymmetry, I wish to work with you to perform a gesture of reversal: A repatriative extraction. Working together with you, I want to arrange for the long-term removal of one of the many Nazi artifacts from your museum. While this extraction can only serve a symbolic purpose, its effect would introduce a real absence into your collection; an absence which speaks more broadly to the collecting activities of museums, many of which retain similar problematic objects also justified by their historical value. The particular artifact and the exact extraction protocol can be negotiated with you, either a long-term loan or bequeathment, but on the agreed-upon date I will put an object in my pocket and leave the museum. I will not photograph, exhibit or sell the object, nor will I destroy it. I will act as a vehicle for the object’s release from the museum, its removal from the historical remembrance it does not deserve, and relieve the museum of the burden of its preservation. The absence remaining in its place – an empty glassine envelope and description of the no-longer present object – will bookend the absence pertaining to the provenance of these objects, and the representational absence of Jewish life in the district.

I look forward to your response,

As a result the museum has closed communication with the artist, and refuses to allow the artist to exhibit his letter. Schwebel’s work has been subsequently excluded from the exhibition, and Schwebel has received no response as to whether the museum will honour its contract to pay the artist for his work.
His name is no longer listed online amongst the contributing artists.