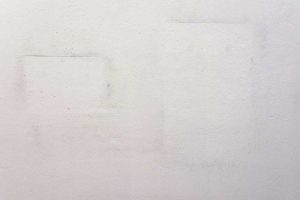 The series Entities of Dutch artist Ties ten Bosch consists of colour changes on the wall.
The image plays with the memory of an image; the aura and emptiness that it leaves behind, both physically as morally. The two versions in the image shown here are based upon works that have been stolen. The left one is a composition in white and red by Piet Mondriaan, stolen in 2012. The one in the right is based upon the Mona Lisa which was stolen in 1911.